Some of my readers may recall my not-so-favorable review of Disneynature’s “Chimpanzee,” and how I criticized the out of place jokes in Tim Allen’s narration as well as the overall lack of information in a documentary that’s supposed to educate us about the subject. “Bears” manages to rectify one of those problems.

John C. Reilly narrates the story of Sky, a brown bear raising two cubs named Scout and Amber. We’re taken through a year in their life, as the new mother tries to lead her cubs to a safe place where they can eat all the salmon they want in order to build up the fat reserves necessary for winter hibernation. 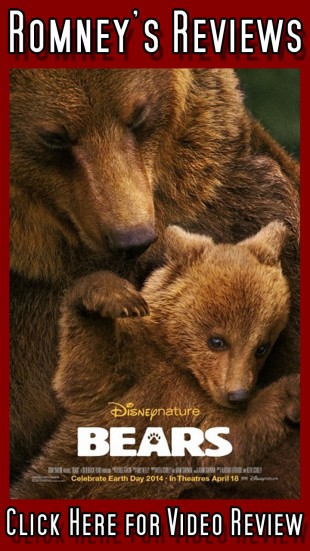 The film is more upfront about the comedic narration. As such, it’s easier to get into, but the film also benefits from having its humor come from what’s actually on screen. Reilly’s narration comes across as less forced and more organic, giving it an almost improvised feeling.

Another plus is that the names given to the “characters” of the story are a lot more creative this time around. This may stem from the fact that there’s no clear “villain,” but none of the names caused me to groan nearly as much as the ones in “Chimpanzee.”

What also helps this film is that the story is clear and easy to follow. We have a clear protagonist, Sky, a clear goal, finding a safe place to eat salmon, and clear stakes, making sure her cubs will survive the journey and the following winter hibernation.

From a technical standpoint, “Bears” is well shot and edited, treating the viewer to some breathtaking scenery and some intense shots, when either predators are approaching, or two bears are fighting.

That said, this film has the same problem as seen in “Chimpanzee” in the sense that it’s not very informative. I didn’t really learn anything over the course of the film’s 90 minute runtime. That’s not the mark of a good documentary.

Overall, it’s an okay film. It made some improvements over the previous outing for Disneynature, but the brand itself really needs to decide what type of documentary it’s going to put forth, be it informative or tantamount to the dubbed over animal footage of “Whispers: An Elephant’s Tale.”

If you’re looking to learn about animals this Earth Day, there are better documentaries available, even when it comes to ones intended for children. Better yet, just go to the zoo.

SLiCE: Make your mark in the community