Home Arts and Entertainment Movie review: ‘Heaven is for Real’ leaves something to be desired

With “Heaven is for Real” now in theaters, this year has been a crowded one when it comes to religiously-themed cinema. Whether they were adaptations of stories from the Bible or modern-day “inspirational” dramas, studios seem to be hoping that God is going to provide the greenbacks.

For some films, it’s worked when you look at the current gross of films like “Noah.” For others, most hope to rake in the first week ticket sales from the more zealous religious communities before dropping out of the top ten like a rock, as seen with “Son of God.” 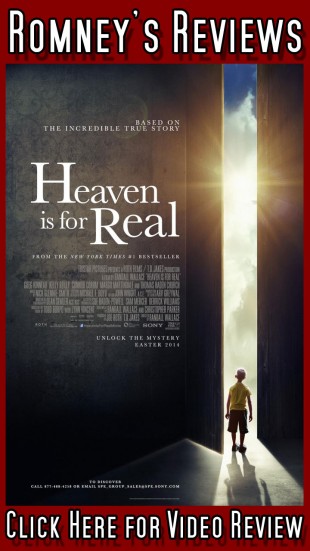 Which category will “Heaven is for Real” fall under? That remains to be seen, but the prospects of this film’s box office performance look very grim indeed.

Greg Kinnear stars as Reverend Todd Burpo, a pastor whose faith and livelihood is put to the test when his son Colton, played by Connor Corum, has a near-death experience during a surgery to remove his appendix. Upon recovering, Colton claims to have visited Heaven, describing it with equal parts innocence and straightforwardness. He also mentions information regarding Todd’s deceased grandfather and events surrounding his surgery that he had no way of learning prior or during the surgery. Caught between faith and logic, Todd has to decide what he believes, and how to tell his son’s story to the world.

There were three things that came to mind while watching this movie.

First, the overall message, while mostly harmless, is a bit muddled. This comes from the feeling that the people involved with this film were trying to make it appeal to everybody, as it comes across as very “safe.”

Second, the film is shot and paced in a manner more akin to a TV movie than a theatrical release. It has a really slow beginning, with the inciting incident occurring after a good 20-30 minutes. While that pacing works for a TV movie with commercial breaks, as an uninterrupted feature, it drags on after a while.

Last, the trailers set up the wrong kind of expectations. When seeing the trailer, it makes the film look like something akin to “Ghost Whisperer,” where it’s going to be a story about the comfort of life after death. That’s not the case, as it’s more the story of a man, Greg Kinnear’s character, trying to make sense of a strange event that even he himself has a hard time believing despite being a pastor.

The only major problem I had with the film was its attempts to actually show Heaven, or at least Colton’s description of it.

While I can understand the rationale of film being a visual medium, if they kept those elements ambiguous by having Colton’s story be the only thing we learn as an audience about Heaven, it would’ve made the story stronger as a whole.

All in all, this isn’t a bad movie, but it doesn’t carry that much staying power either.

The “safe” execution of the film is probably its weakest point. The story could’ve been an interesting one if the director had made a clear decision about his approach. As it stands, “Heaven is for Real” is probably not worth seeing in theaters and is probably better viewed on Netflix out of mild curiosity, while enjoying a lazy Sunday afternoon.