Allow me to open my review by saying the following: I have never read the Bible. I am not part of any established organized religion. I have seen quite a few religious movies with varying degrees of quality, with Dreamworks’ “Prince of Egypt” being one of my favorite animated films. 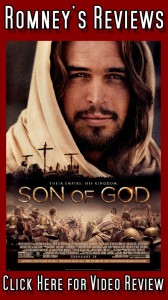 I mention this because there is one thing that needs to be said to the movie-going public. Just because something is based on the Bible, it doesn’t mean it should be given a free pass. Good biblical movies have come out and have been able to appeal to mainstream audiences. By giving films carte-blanche just because it’s adapting a Bible story sends the wrong message to filmmakers and studios. This is your holy text. As such, adaptations need to be held to a higher standard of quality than what is usually delivered.

“Son of God” is a feature-length edit of Mark Burnett and Roma Downey’s ten hour miniseries “The Bible,” with some deleted scenes added in and others cut out. The film covers the span from the arrival of Pontius Pilate, played by Greg Hicks, in Jerusalem to the crucifixion and resurrection of Jesus, played by Diogo Morgado.

The fact that this film was initially a History Channel mini-series really shows in its presentation and pacing.

In terms of presentation, the cinematography contains the kind of blocking often seen in films with limited sets. The visual effects are also lacking the kind of polish that would make the added buildings look real. I can compliment the film on its set and costume design at the very least, since it shows that there was a great deal of effort put in. However, it all comes across as a made-for-TV movie.

The pacing and overall presentation of the story is the film’s greatest failure. The movie is severely lacking in character development, as we are given the characters of Jesus and the apostles, but we never really spend enough time with them to see their personalities as characters.

You can glean a little bit here and there, but we’re just not shown enough to really see them as separate people. You could very well switch everyone’s dialogue around and the film would make just as much sense.

Another problem with the pacing is that there are huge gaps and pieces missing from the story. Most of the film is spent building up to the crucifixion, sliding to a screeching halt as we spend a good chunk of time literally watching Jesus die on the cross. Then the film literally plays snippets of the removed scenes as part of a montage during the end credits.

On a related note, knowing that this was initially part of a mini-series, it felt like the people editing this film didn’t have access to the raw footage, or even the rough cut footage of the series, and instead had to pull from the completed episodes to create a feature-length version.

One issue I have is an underlying problem with biblical movies in general.

The audience is expected to automatically know and understand information that we are never shown, nor told. I know that Christianity is a world religion and a lot of people are, at least remotely, familiar with the story of Jesus.

However, you can’t use that assumption as a basis for a film. You have to properly introduce your characters and give us a reason to care about them so that when one betrays another or when one is tortured and killed, we feel those same emotions. This film doesn’t do this properly, expecting the foreknowledge of the New Testament to carry the audience through the story.

While I am probably going to get a lot of flack for saying this, this film is not worth the money. As a feature, it just doesn’t hold up very well. We barely get to know the characters and certainly not enough to actually care. The effects, while passable for television, don’t look good on the silver screen. It falls prey to the common problem of up-scaling, leaving the digital effects looking kind of blurry.

If you really want to support this production, then just watch the full ten-hour miniseries – Amazon sells it on DVD for about $25. You’ll get a lot more out of it as it has more time to tell the complete story and properly flesh out the characters and details that were left on the cutting room floor when this desperate cash-grab was being cobbled together.