Home Arts and Entertainment Movie Review: ‘Draft Day’ desperate to be the next ‘Moneyball’

I’m going to be honest here. I know next to nothing about football, specifically American Football, not to be confused with soccer. I know the basic rules, but I’m not what you would call a ‘fan’ of the sport, or any sport for that matter. 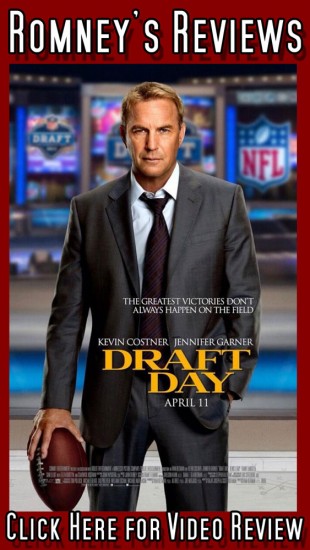 I mention this because I want to make it clear that there is a bias going into the film in regards to my level of interest in the sport and film’s subject matter: the drafting of college players to the different teams of the National Football League. However, any good film should be able to pull a viewer into its story even if it’s about a subject matter that wouldn’t otherwise interest them.

“Draft Day” follows the efforts of Sonny Weaver Jr., played by Kevin Costner, who is the General Manager of the Cleveland Browns. In the minutes leading up to the NFL Draft, Weaver is scrambling to get the top player in the draft to join the team, leading to a story that attempts to showcase the wheeling and dealing among the team managers as everyone tries to come out on top with the best roster. Rounding out the cast, we have Jennifer Garner, Denis Leary, Chadwick Boseman and Tom Welling.

There were some scenes in the film that may have sounded like a good idea, but upon further consideration, only worked to slow it down. This is especially true for some moments when the smallest amount of common sense renders the actions and reactions of the characters completely pointless – it was basically drama for the sake of drama.

Adding to that, there were many times throughout the film when they tried to have “that” scene; a scene that the audience is supposed to remember and quote the lines endlessly ad infinitum. However, these moments come across as a little too desperate.

“Draft Day” is not without its moments, as there are some good comedic bits as well as having the film bookend fairly well with a key exchange between Costner’s character and the manager of the Seattle Seahawks, played by Patrick St. Esprit.

The strongest moment of the film would have to be the actual “drafting” of the players, as we can actually see the build-up and tension of the event in a very “Sorkin-esque” manner. However, the moment is all too brief and only comes after sitting through pointless dramatic scenes prior to it.

Many reviewers are probably going to make comparisons to “Moneyball,” given that this is yet another film focusing on the business side of a well-known sport. However, the key difference is that “Moneyball” was based on a true story and actually had the mathematics to back it up, whereas this film is fictionalized and doesn’t base the actions of our main character on anything except for what may have been recycled from business movies in the past.

I may have received more out of it if I was more interested in football, but as a film, it’s not very memorable. It has its moments, but doesn’t really warrant much more than a casual viewing on Netflix.