Home Arts and Entertainment Movie review: ‘Muppets Most Wanted’ not as strong as its predecessor

With how well-received Disney’s relaunch of the “Muppets” franchise was, a sequel was inevitable. This is something the film itself is very quick to point out with its opening number. Like most follow-ups to hit films, this outing for Kermit and his crew doesn’t pack the same punch that the relaunch had. 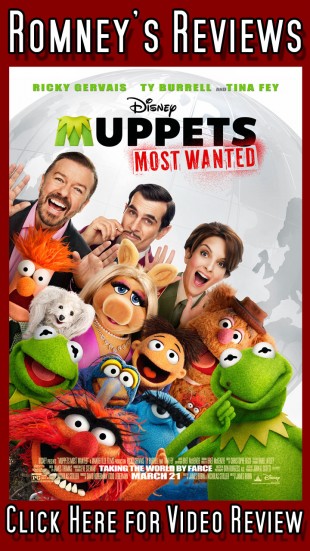 Picking up after the events of “The Muppets,” Kermit and company are talked into going on an international tour with a shady promoter by the name of Dominic Badguy, played by Ricky Gervais, who in actuality is a notorious art thief that is in cahoots with an amphibian art thief named Constantine, who just so happens to bear a strong resemblance to Kermit.

After making the switch in a fashion that is equal parts “Prince and the Pauper” and “South by Southwest,” Constantine impersonates Kermit as the tour travels to areas key to his plan to steal the Crown Jewels of the United Kingdom while the real Kermit is thrown into a Siberian Gulag.

In a movie as crowded as this, it’s expected that the characters would suffer in the development department. However, this lack of attention on certain characters that are “key” to unraveling the mystery removes the needed amount of buildup to allow these moments of “payoff” to carry any weight. They almost come out of left field.

This film does poke fun at some of it’s own flaws in an attempt to lampshade them, but it’s almost as if the film hopes that by making fun of them, the audience will forgive, if not forget those flaws are there. It didn’t work.

When it comes to the music, some songs were clearly better than others when it comes to their execution; the weaker songs come across as filler. While the previous film wasn’t much better, since it was playing the nostalgia card, the original songs it did have were able to stand on their own. The music was entertaining throughout most of the film, but I did get bored a few times while watching.

Humor is the film’s strongest point. However, there were a few missed opportunities for jokes here and there. On top of that, some of the jokes, while getting a chuckle from the audience, did come across as a bit of a reach.

Overall, while “Muppets Most Wanted” is entertaining, it’s not as strong as its predecessor. That said, it didn’t attempt to capitalize on the nostalgia of the audience and instead opted for mostly original material. At the very least, it wasn’t a weaker retread of the previous movie. Muppet fans and children will find it enjoyable, and it is a stronger family film than “Mr. Peabody and Sherman.”