It appears that EA is looking to beat Ubisoft to the punch when it comes to having a western game studio taking part in producing adaptations of their video game franchises. However, given that EA is one of those companies where many of their franchises were the results of buying out smaller companies or nabbing the very enticing sports and movie licenses, that’s not really saying much. 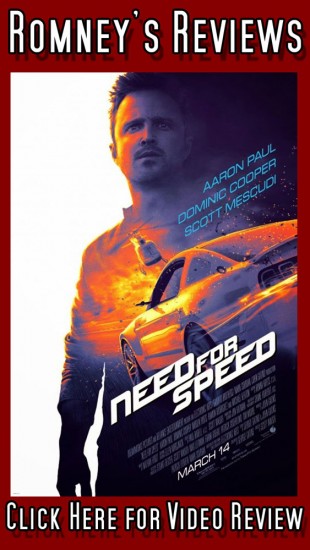 I haven’t played any games in the “Need for Speed” franchise, so I have no familiarity with whatever storyline the filmmakers over at Touchstone would be pulling from if there’s any at all. However, if you’ve seen the trailer, or any of the movies in “The Fast and the Furious” franchise, then you’ve pretty much seen this movie.

Aaron Paul, fresh off “Breaking Bad,” stars in this film as Toby Marshall, a street racer/mechanic who’s sent to jail after a race with rival Dino Brewster, played by Dominic Cooper, which leads to the death of his friend in a brutal accident.

Upon being released from prison, Marshall seeks to both avenge his friend and prove his innocence by entering a high stakes street race held by an eccentric racing aficionado, played by Michael Keaton.

What’s there to really say about this film? I went in expecting fast cars, and that’s pretty much what I got. The action is pretty much what you’d expect. That said, there was definitely a point in the film where it effectively jumps the shark, pretty much diminishing what little investment I had in the film.

On a related note, the writing gets to be pretty cliché at times, as there are many contrivances that make the script feel as if it’s been lifted from action films from the 90’s and early 2000’s.

I understand that you’re not going to go into this film expecting high art, but the film just boils down to set pieces, chase scenes, and attempts at comedy that range from slightly funny to straight out of left field.

In terms of the acting, it’s a bit of a mixed bag. Aaron Paul and Michael Keaton gave the best performances as the former had a likable personality and the latter seemed to embrace the silliness of the whole thing. The worst performance would have to come from Dominic Cooper, who is basically playing a cartoon villain straight out of “Speed Racer.”

To reiterate my earlier question, what can I really say about this film that any movie-goer with half a brain hasn’t already figured out?! It’s quite literally an all flash, no substance, popcorn flick. If you like over-the-top car chases then this film delivers. That’s the long and short of it.

Is it worth the full ticket price? No, it is not. This is best viewed at a dollar theater matinee when you just want to turn your brain off for a couple of hours. It looked just fine in 2D, so put the money you would’ve spent on the 3D surcharge towards some extra refreshments – if you’re that desperate to empty your wallet.