Home Arts and Entertainment Movie Review: ‘Winter’s Tale’ is funny for all the wrong reasons

Based on the novel by Mark Helprin, “Winter’s Tale” is the story of a young house burglar played by Colin Farrell who falls in love with a terminally ill young woman played by Jessica Brown Findlay, all while getting entangled into yet another war between Heaven and Hell as the burglar is on the run from a demonic enforcer played by Russell Crowe. 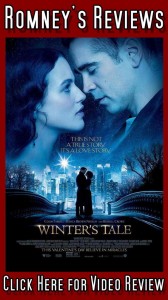 After things go south, the burglar finds himself in modern day New York with no memory of said young woman or demonic enforcer, leading him on a journey to recover his lost memory and the reason for his unexpected immortality.

No, I did not just give a major spoiler in that synopsis, as the film literally starts in present day and then flashes back to the early 1900s for the first hour of the film, letting the whole modern mystery set up disappear until the third act.

It felt like this was initially one of those stories that had the flashbacks appear as the main character uncovered his memories in modern day, but it was then handed off to an obsessive-compulsive director or editor who felt the story had to play out in chronological order, effectively making the marketing campaign a lie.

This leaves the entire film feeling rushed, making the final scenes of the movie, which already suffer from a serious case of deus ex machina since that’s the entire purpose of the plot, feel even more contrived.

This is a movie that’s rife with laughably bad moments, ranging from something as simple as having a particular actor playing the “fresh” prince of darkness to what is probably the worst climactic fight scene since Tyler Perry’s stint as Alex Cross.

From a technical standpoint, a great deal of goofiness comes from the poorly rendered visual effects, whether it’s a badly animated horse that flies with translucent wings or even the added “starlight” effects that fill the frame with so many lens flares that even J.J. Abrams would find it obnoxious.

This film is really bad. The acting is goofy, the effects are passable at best, and the story is so rushed and full of coincidences that it comes across as a knockoff of shows like “Touched by an Angel” and “Highway to Heaven.”

So is “Winter’s Tale” so laughable that it’s worth seeing in theaters? The answer is a big, fat NO. This is the kind of film you’d watch on Netflix if you’re looking for something to make fun of, but if you’re looking for something “romantic” to watch with your special someone, just rent “The Notebook.” It’ll set the same mood, but for much less money.