Home Arts and Entertainment Movie Review: ‘The Monuments Men’: Laying down lives for the sake of...

While contemporary war films are focused on being politically correct, films set during World War II are probably much easier to write due to the fact that the Third Reich has been universally cast as the villains. What I mean by this is that if bad things happen to Nazis in an American-made film, you’re not going to have angry mobs charge the studio with torches and pitchforks. 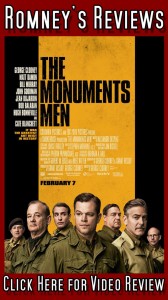 Let me also make it clear that I am in no way a history buff, so I’m not qualified to gauge the historical accuracy of this particular film. As such, I’m merely judging it by how it stands as a narrative.

George Clooney both directs and stars in “The Monuments Men,” which follows a World War II platoon comprised of museum directors, curators, and art historians, that were tasked by FDR to recover artwork that was stolen by Nazi Germany. Rounding out the cast, we have Matt Damon, John Goodman, Jean Dujardin, Bill Murray, Bob Balaban, Hugh Bonneville, and Cate Blanchett.

The first thing that I have to say about this film is that the style was confusing at first. This isn’t the gritty war film, like we’ve see in “Saving Private Ryan” or “Band of Brothers,” but this isn’t exactly “1941” either. There is some well written comedic bits, but it also tries to work-in some key dramatic moments as well.

While it works okay, I feel that the dramatic scenes didn’t really carry much weight because of how thin the story was spread.

The platoon is divided and spread out to other parts of Europe frequently throughout the story, and while the film does an okay job giving everyone a good chunk of screen time, there wasn’t a lot of development of the principal characters.

On that same note, while there is a connecting plot thread in regards to artwork from a Belgian altar as well as a Michelangelo statue, these plot lines didn’t really bring the story together until the very end, and by then, it was only really brought up during the third act.

While it may have pissed off the other top-billed stars, the film needed to pick a moment of the story and develop it into a full film, rather than try to cover everything at once. If they wanted to cover EVERYTHING, then the film would’ve worked better as a mini-series like, “Band of Brothers,” as opposed to a theatrically released film.

Overall, while it is an interesting part of World War II history, as a film, it’s kind of mediocre. It’s at least entertaining, but really needed some polish if this was going to be some epically memorable war film. It’s not the worst film you could see in theaters, but you may be better off waiting for some of the more “anticipated” releases for this year.