Home Arts and Entertainment Movie Review: ‘I, Frankenstein,’ vow to stop lending my likeness to mediocre...
What can I say about Frankenstein that I haven’t already talked about at great length? It’s a classic story of science run amok, and how not facing up to the consequences of your actions can only lead to further problems down the line. 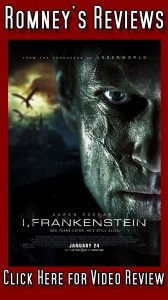 So why do we frequently have the character appear in stories dealing more with the occult as opposed to the scientific? I guess the easiest answer is because of the legacy of the Universal monster movies and the frequent crossovers that came about as the films were relegated to B-picture status. I’m not saying all those stories are bad, as I’ve found a few examples where it’s worked quite well with a great deal of respect paid to the source material.

I bring this up because I feel that the people behind this film were familiar with the story of the novel, but only understood it on a surface level. Why else would they think that Aaron Eckhart would be the ideal choice?

“I, Frankenstein” begins shortly after the death of Dr. Victor Frankenstein, as the monster buries his creator in the family tomb, only to be attacked by demons looking to use the doctor’s research to raise an undead army to conquer humanity. The monster is then saved and taken in by the Order of Gargoyles, since angels have been overused to the point of absurdity. Their leader, played by Miranda Otto, names him Adam and gives him weapons to fight the demons, offering him shelter if he joins their side.

He leaves and wanders the earth for 200 years until he uncovers the plans of the demon prince Nebirus, played by Bill Nighy, to reanimate thousands of corpses to replenish his dwindling army of demons for a final assault against the gargoyles, leading to an all-out war between the two with Adam caught in between.

The first problem I noticed with the film is that it relies too heavily on narration during the opening scenes.

What also doesn’t help is that it’s delivered to us by Eckhart, who, while a good actor in his own right doesn’t pull off the gritty, brooding anti-hero very well. It felt too forced and unnatural, not to mention going against some of the key facets of the monster as a character.

The second issue I had with the film is the way some things about the world were addressed. Why couldn’t the characters just say “kill,” “slay,” “dead” or “die” when referring to the gargoyles and demons? Does it really matter that we know demons “descend” and gargoyles “ascend” upon being killed? Just call it what it is – death!

The final nitpick that comes to mind is the effects. While they were passable, they also looked kind of dated, like the kind of effects that you would’ve seen in a blockbuster from the early 2000’s. It’s at that level of completion that it looks like they knew what they were doing, but you can still tell that it’s CGI.

As a whole, “I, Frankenstein” is just the usual occult action schlock you expect to find on DVD at a Walmart right next to the straight-to-video knockoffs and the discount anime. The story is mostly boring and clichéd, with ideas we’ve all seen before in films like Van Helsing, The Mortal Instruments, as well as numerous failed triple-A video games.

If you’re into this kind of schlock-y occult action, then wait for this film to come to the dollar theaters – and see it in 2D, as there’s not much here that we haven’t already seen before.