Despite the frequent insistence of many of my grade-school teachers, I have not read any of the works of Orson Scott Card. Bear in mind, this was during the days of Harry Potter, and even then I focused more on the movies. As such, I never really got into the fandom that has sprung up around the “Ender” series and its subsequent installments. 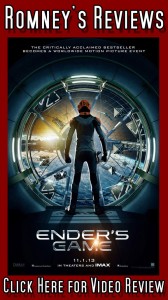 “Ender’s Game” is set in a future where humanity is at war with an alien species known as the Formic. After a climactic battle that drove them away, the military created schools to train the next generation of commanding officers to lead Earth’s forces.

Ender Wiggin, played by Asa Butterfield, is a student, who after showing latent potential, is recruited to attend the Battle School, a military training facility orbiting Earth where teams of students take part in zero-gravity war simulations. Rounding out the cast are Harrison Ford, Ben Kinglsey, Hailee Steinfeld, Viola Davis and Abigail Breslin.

From a technical standpoint, the film is impressive.

The visual effects and cinematography look really good. The design choices of certain elements, namely certain costumes, looked a little goofy, but for the most part things worked as a whole.

The story, on the other hand, had a few problems as the film comes across as a VERY truncated summary of a larger story. It does a good job following the main character, but we never really get to know the side characters that we’re expected to care about. We don’t see much of their relationship with the main character, save for one or two moments in a few places, making it hard to really get attached.

Another problem was that the story felt really cramped in its episodic approach.

Some scenes being more akin to a television series with more time to tell its story. We bounce through a lot of the locations and plot points very quickly with no breathing room between key scenes.

Story issues aside, “Ender’s Game” is pretty solid and having really good actors for the key roles is a definite plus. However, I wouldn’t put this on the same level of the other blockbusters that have come out in the past few months. It will most likely please fans of the novel that are already familiar with the characters. I’d recommend seeing this in 2-D and saving the $3.00 surcharge for 3-D.