Home Arts and Entertainment Movie review: Consult your doctor before using ‘The Counselor’ as a sleep...

I’ve been keeping a list of films that have almost put me to sleep over the course of my fairly short career as a film critic. After “Drive” and “Killing Them Softly” nearly knocked me out, “The Counselor” manages to hold off on the snooze-fest until after the opening credits, managing to have an arousing but ultimately pointless scene that starts off with a “bang.” 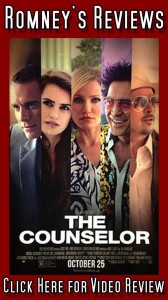 The film comes to us from writer Cormac McCarthy and director Ridley Scott, with the top-billed actors being Michael Fassbender, Penelope Cruz, Javier Bardem and Cameron Diaz. As for the story, it follows the downward spiral of a nameless attorney, played by Fassbender, as he becomes embroiled in some sort of underground dealings with the drug trade.

There are two glaring issues that really hurt this film. The first is that we’re given a set of characters but aren’t given any real reason to care about anything that happens to them. While you could empathize with the main character to some degree, you never really see the reasons for him to get involved with “the deal.” It’s only moderately implied, but not communicated very well.

On top of that, the film jumps around each of the characters without really explaining their overall purpose to the story.

The whole thing mostly comes across as some sort of vanity piece that all the actors wanted to take part in.

The second issue is that much of the screenplay feels like it was stitched together from the unused and omitted lines of the earlier drafts of much better movies. It’s as if they were hoping that at least one of the scenes would deliver a memorable line but ultimately failing, as the film mostly attempts to wax poetically about topics such as greed, sex, the consequences of one’s actions and even doing the “Good Will Hunting” trope where the very things the characters speak of earlier in the film play a part at the end of the film.

Overall, “The Counselor” was boring.

I didn’t really know the characters nor was I really invested. It comes across as an art-house vanity piece and doesn’t really do a good job of telling its story. The more hardcore cinephiles may get something out of it, but in my opinion, you’re better skipping this one.