Based on the first book in “The Mortal Instruments” series, “City of Bones” follows Clary Fray, played by Lily Collins, a Brooklyn teenager, who while hanging out with her friend Simon, played by Robert Sheehan, witnesses a murder in the center of nightclub. On top of being the only witness, she has also been subconsciously drawing a mysterious symbol all over various pieces of paper. 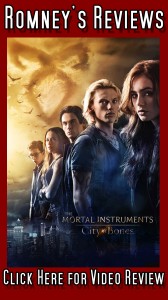 She catches the attention of the murderer in the club, Jace Wayland, played by Jamie Campbell Bower, a “shadowhunter” who fights against the forces of darkness, and pulls her into the world where monsters, legends and nightmares are all real.

This film gets off to a really strong start. It doesn’t waste anytime in introducing the setting and characters, and the story kicks off within the first few minutes.

In addition to introducing the characters very quickly, we also get some really good bits of characterization that gives quick and subtle insights into the character’s personalities.

However, at the midway point, we begin to see quite a few clichés layered throughout the script – namely, the forced sexual tension that leads to a very clichéd and short-lived romance.

On top of that, the execution of the exposition scenes was weird. While they get points for showing as opposed to having it done through dialogue, the shot and editing choices felt too shaky and haphazard and clashed with the style of the rest of the film.

By the end, the actual end, and not the numerous fake-outs and ending points that are throughout the third act, there are so many plot twists that the story begins to look like a Spanish telenovela.

While the story was engaging and the characters mostly likable, one problem the film has is that there’s too much crammed into the story. I understand wanting to be faithful to the original source material, but this is one of those times where a few cuts could have, and probably should have been made in order to alleviate the cramped feeling that plagued the final scenes.

From a technical standpoint, this film is paced very well and features some really good action scenes.

While some of the dialogue is a tad cheesy, most of the cheesiness occurs during the final moments. The major negative the film has is that the end feels too long, as if they had to bounce through a great deal of the book but didn’t have enough time left in order to do so at a smooth pace.

Overall, while it is far from perfect, it’s not the worst book-based movie I’ve seen this year. It starts out strong but then takes a nose dive during the latter half. While I do recommend it, I’d advise you to wait until it reaches the dollar theaters; I can’t imagine having to stomach all of the out-of-nowhere and potentially squicky plot twists after paying full price. On my personal scale, I give “The Mortal Instruments: City of Bones” a 3.5/5.