Home Arts and Entertainment Movie review: ‘R.I.P.D.’ proves the old axiom of all flash, no substance

Summer is the season for big-budget, high-concept films like “R.I.P.D.” to test their mettle in the gladiatorial arena that is the weekend box office. While you get your fair share of enthralling blockbusters, you also get films that hook you in with the concept, only for you to realize that you just paid money—a lot of it if you’re seeing it in 3D—for something that would probably be passed over in your Netflix queue. 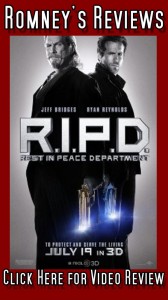 Based on the comic by Dark Horse, “R.I.P.D.” stars Ryan Reynolds as Nick Walker, a cop who’s killed in the line of duty and drafted into the Rest In Peace Department. He and his new partner, Roy Pulsipher (played by Jeff Bridges), and other fallen officers are tasked with bringing in souls who seek to escape judgment by hiding out among the living.

Although the concept is interesting, the execution is a little light and feels underdeveloped.

While we’re given the essential information, we’re not really given much in terms of development, even though the film tries with a few of the more dramatic scenes.

On top of that, it also feels like a comic book movie in the sense that a great deal of information that was present in the source material was either truncated or excised when being adapted for the screen.

The effects in this film are also a tad lacking, as they feel cartoony from time to time.

While I understand the film isn’t trying to be realistic, it’s doesn’t really accomplish much in the way of stylization, making the effects look somewhere in between the CGI from the 90’s and the character models from a Gamecube game.

The action in the film also leaves a few things to be desired as there isn’t really a whole lot of tension and gets downright silly towards the end of the film. When the films does introduce something that poses a threat to our main heroes, it resorts to the usual cliché where the heroes make it through the swarm of bad guys unscathed.

All in all, this film is delightfully cheesy at best and mostly forgettable and boring at worst.

It’s not a film I’d recommend seeing in theaters as it doesn’t really even offer that much in terms of experience value. It’s more the kind of film you’d rent or stream from Netflix if you were bored or at home sick. On my personal scale, I give “R.I.P.D.” a 3/5.