There’s not a year that passes by without some low budget, off-season horror film attempting to claw at what few dollars it can before it fades into obscurity. “Oculus” is that film in 2014.

A moderately interesting premise that isn’t actually that original? Check. A creepy sounding Latin word as the title? Check. A star that is known from something popular but is still unknown enough to the public so that she can be hired on the cheap? Check and check.

“Oculus” tells the very disjointed story of Tim (Garret Ryan) and Kaylie (Annalise Basso), who lived through the trauma of both their parents dying and the younger of the two, Tim, being arrested for the murders. After spending 10 years in a mental institution, the grown-up Tim (Brenton Thwaites) attempts to reconnect with his older sister, Kaylie (Karen Gillan, “Doctor Who”).

While Tim has come to terms with the events of his past, Kaylie remembers things differently, and is dead set on proving that the death of their parents was caused by a supernatural entity living in an antique mirror. 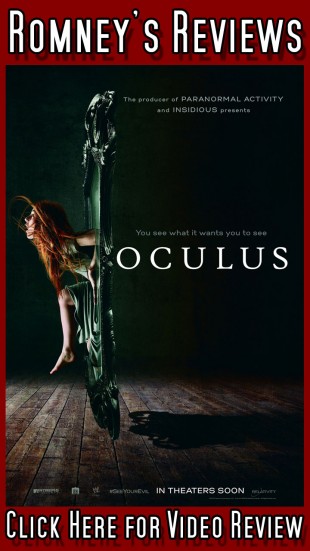 While the trailer made the film sound moderately interesting, its execution just makes it confusing and hard to follow. The main problem is that we see both the events of the past and present. That idea could’ve worked if the details surrounding Tim’s incarceration were left ambiguous and revealed throughout the film. However, everything is explained fairly quickly at the start of the film, making the later scenes set in the past mostly pointless to the overall story.

Another key problem with the story is that it tries to set “rules” for what the mirror does to its victims. On some fronts, it’s fairly creative as it incorporates the idea that it messes with the minds of the victims while being able to “cover its tracks” so to speak. However, there is a general lack of consistency in what the mirror or the entity inside it actually does, especially when we begin the third act.

The best way to describe the story problems is that it felt like the writers and director had a concept that would work for a short film, but then decided to pad it out to a feature, by making things needlessly complicated.

The idea of a haunted mirror is not a unique concept, but it is one that opens up a great deal of possibilities. The film should’ve either been an “Amityville Horror” story from the perspective of the children, or an investigation-based psychological thriller like “The Haunting” where all of the supernatural elements are left ambiguous, allowing for the idea that it may have been in the heads of the main characters depending on how the viewer interprets it.

From a technical standpoint, “Oculus” presents itself well. The cinematography and visual effects are executed with a good degree of competence. My only complaint would be the confusing editing choices, but that appears to be more of a problem with the screenplay more than anything else.

Overall, the film tries to have its cake and eat it too by combing two stylistically different stories, leading to a nightmare of haphazard editing, confusing pacing, and needlessly shoehorned elements from other horror films like “The Shining” and “Final Destination.”

It also doesn’t help that a great deal of the actions of the characters and the overall premise buckles under the application of common sense, an annoying trope of horror cinema that just refuses to die because of the erroneous notion of something being “so bad, it’s good.”

There was potential in the premise, but the story really needed focus in its overall approach. While it doesn’t have very many technical failings, it’s not worth seeing even at a dollar theater matinee. You’d best wait for this film to come to Netflix.

Movie review: ‘The Conjuring’ provides quality scares, but not without some problems