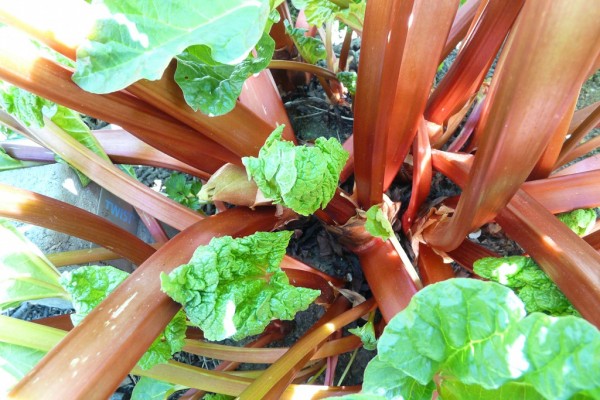 Thinly wash, trim and slice rhubarb and strawberries. Place in a bowl and drizzle with honey. Stir well, loosening any honey that has adhered to the bowl. Set aside.

In a blender or food processor, grind almonds into a flour. Add a pinch of sea salt if desired. Once the almonds are the same texture, coarsely chop dates and add to the food processor. Pulse to mix. The crust mixture will be crumbly.

Press crust into the bottom of two ramekin dishes or one 4-inch pie dish. Top with strawberry-rhubarb filling, but use discretion with the amount of juice you include as it can saturate thinner crusts if left to sit.

If preparing to serve later, add strawberry-rhubarb filling just before serving. Crust will keep in the fridge for several days, prepared strawberries are best within a day.

Rhubarb is a relative of buckwheat, and can have a sour, earthly flavor. I like to think of this underused vegetable as the “red celery.” Not that it really tastes all that similar, but it looks like it after it’s been cut.
Many of us primarily associate rhubarb as something that is added to strawberry pie, which has earned it the nickname of “pieplant.” It has a long written history beginning in 2700 BC.

For about 5,000 years, rhubarb was grown and used for medicinal purposes. Chinese herbal practices include the use of rhubarb root, also called Chinese rhubarb, Turkey rhubarb and Indian rhubarb, both internally – to relive severe constipation and stomach ailments, and externally – for swelling, fevers and burns.

Some people say that rhubarb promotes blood circulation if eaten in small amounts before meals. It is also said that rhubarb root can relive pain and inflammation and can reduce autoimmune reactions.

In the mid 1500’s, rhubarb was so popular and known for its medicinal qualities that it was more expensive than cinnamon and double the price of opium.

When the Russians came to Alaska in the late 1800’s, they bought rhubarb to help fight scurvy. Rhubarb is high in vitamin C which is known for strengthening the immune system.

In recent studies, researchers say that rhubarb root may be helpful in Hepatitis B treatment. One researcher, Stephen Daniells, believes that vitamin K in rhubarb might reduce insulin resistance in men.
Rhubarb leaves are bitter and toxic, though an average human would have to eat 11 pounds of the stuff for it to be lethal.
Those leaves can be made into liquid to kill many garden bugs. Unlike the leaves, the rhubarb stock is good to eat and grind into powder.

In the eighteenth century, people began to consume rhubarb root as food in stews, drinks and pies.
There are two broad categories of rhubarb. The Victoria is the type that is most common in the US. They are usually larger and disease resistant and thrive in both cool and warm climates. Victoria rhubarb’s stalk goes from green to light red on the exterior and is green on the interior.

Pure red rhubarb has a deep red color on both the interior and exterior and includes varieties such as Canada Red and Crimson Cherry. Ben Franklin is thought to have brought the red rhubarb to North American east cost in 1772.