Studios have decided to produce more sports movies, like “Moneyball,” which focus on the inner workings of the front office. They may also tell a story of a historical event or figure without actually giving a definitive and satisfying story, as seen in “42.” Thankfully, director Craig Gillespie interweaves these scenarios beautifully in “Million Dollar Arm.” 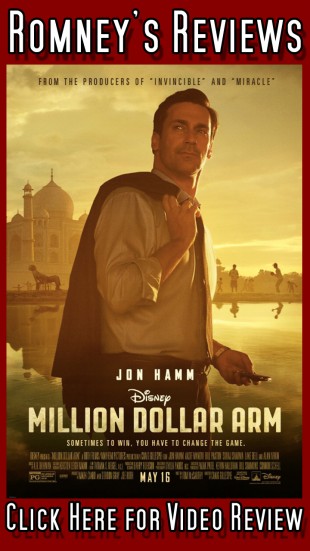 Jon Hamm stars as J.B. Bernstein, a sports agent who finds himself at the brink of ruin unless his agency can sign on some talented players and broker a deal with a sports league. One night, after watching a game of cricket, Bernstein gets the idea to travel to India to find the next great pitcher, staging a reality show competition that is the film’s title, “Million Dollar Arm.”

The two winning finalists, played by Suraj Sharma and Madur Mittal, are brought to the U.S. to be trained, with the hope that they can be drafted into a major league team. Rounding out the cast, we have Alan Arkin, Lake Bell, Bill Paxton and Aasif Mandvi.

The first thing that I immediately noticed is how the movie adheres to the three-act structure.

The arc of our main character, Bernstein, is very easy to follow and map out when lining it up next to Joseph Campbell’s monomyth. While there are some aspects that differ from the outline, the plot-points and story beats are very easy to see, making this feel like a more traditional film than some of its more episodic contemporaries.

What also helps is the fact that the characters we’re given are well-written and well-cast, making for a likable experience all around. Even as someone who isn’t familiar with the real-life Million Dollar Arm competition, or even the story of Rinku Singh and Dinesh Patel, I found myself really getting into the story and liking the characters.

Another thing that sets this above a film like “42” is that its conclusion is actually a very satisfying one. This is helped by the fact that the characters have a clear goal with obstacles ahead of them.

From a technical stand point, there’s not too much to say. It’s well-shot, well-edited and very well-paced. It’s one of the few films I’ve seen this year that boasts great execution as a whole.

Overall, I really enjoyed “Million Dollar Arm.” It strikes a balance between the brokering behind the Million Dollar Arm competition and the trials and tribulations that come with trying to break into the major leagues. On top of that, it’s all played by a cast of well-written and likable characters.

If you’re looking for a feel-good movie and want to take a break from the onslaught of costumed crusaders and explosion-addled blockbusters, then I highly recommend checking this film out.

No. 20 SLCC baseball builds on experience