Science fiction movies made in Hollywood often become less about understanding the genre and more about what’s going to sell. For every Neill Blomkamp that makes us think, there’s a J.J. Abrams who’s out to entertain. Which spectrum does “Transcendence” fall under? That’s hard to say either way. 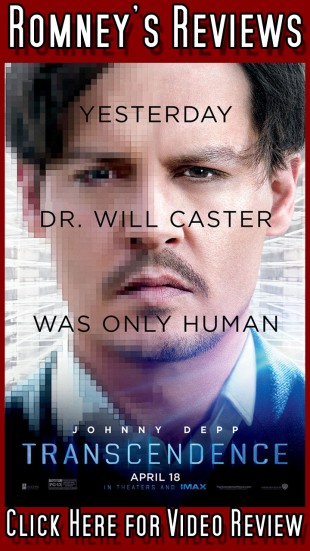 Johnny Depp stars as Dr. Will Caster, a foremost researcher in the field of Artificial Intelligence who’s on the verge of making a self-aware A.I. However, that’s made him the prime target of an anti-technology extremist group that’s dead set on stopping his research, prompting a series of coordinated attacks against various research labs across the country, including an assassination attempt on Caster’s life.

In an effort to save Will’s life, his wife Evelyn, played by Rebecca Hall, and his friend Max, played by Paul Bettany, attempt to digitize his brain and hybridize it with the A.I. Will and his team were developing. As the now digitized Will connects himself to the world wide web, Evelyn and Max are left to ponder and witness the ramifications.

While this film has interesting ideas, it doesn’t really go anywhere with them.

“Transcendence” starts out well as we see the more immediate effects of the story’s premise prior to a series of time-skips. However, as we head into the third act, the suspension of disbelief shatters as the film begins to follow the logic of nanotechnology equating to a global panacea.

What doesn’t help the film is the fact that some of those ideas, and even characters, are ultimately pointless to the overall story, serving as little more than a MacGuffin. This compounds the levels of absurdity this film resorts to in order to raise the overall stakes despite not actually reflecting that in the actions of our main “antagonist.”

From a technical standpoint, the film looks good. The cinematography, visual effects, and set design create a very believable world. The only real hindrance is the screenplay itself.

Overall, “Transcendence” suffers from what is best known as the “Stephen King effect.”

This is where a story manages to draw you in and get you invested, making you feel like you’ve been entertained upon completion before realizing just how many plot-holes and inconsistencies there were. It’s not to the level one would have seen in something like “It” or “The Langoliers,” but this is definitely a film that doesn’t really hold up under scrutiny.

It looks good, and the premise is interesting, but “Transcendence” isn’t worth paying full price at the theater. It really needed to pick a few of its really good ideas and develop them instead of briefly touching on different points in broad strokes. If you’re really curious, just wait for it to come to the dollar theaters.