Home Arts and Entertainment Movie Review: ‘Sabotage’ is probably what happened to this movie

Problems can arise when an actor, who’s never been known to be involved in serious projects, even in his prime, signs on for a film that tries to be dark and gritty to the point that it comes across as juvenile. 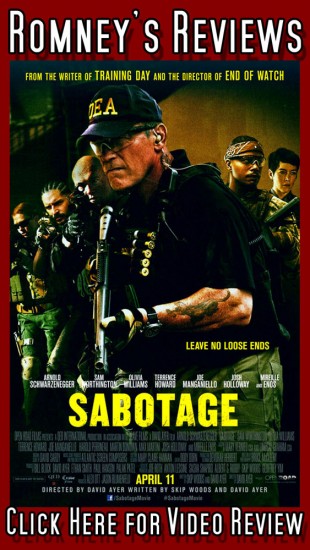 “Sabotage” is the story of a DEA Special Ops unit, comprised of what are the loosest examples of characters I’ve ever seen on film. The unit, played by actors Arnold Schwarzenegger, Sam Worthington, Terrence Howard, Joe Manganiello, Max Martini, and Mirelle Enos, is murdered one by one after an internal investigation of a drug bust where $10 million in cash went missing.

Adding to roster of non-characters is a homicide detective played by Olivia Williams, whose personality is as stable as a house of cards being built during an earthquake.

This film is like something out of the mind of a teenager who thinks that watching and making films filled with violence and gore is a sign of maturity. It relies heavily on shock value to carry the film instead of a well-written story, something that even comes across in the vulgarity-addled dialogue, which sounds like it was written from the same mindset.

The setup of the film had potential as a neo-noir crime drama. Instead, we’re given something that feels like it was made to appease studio executives and movie stars with huge egos. It may very well have been a neo-noir story in an earlier draft, only to be altered into a Schwarzenegger vehicle that wears a cheaply-made mask of “grit.”

This film wasn’t fun. It wasn’t even laughably bad. It was unpleasant and goes about its dark subject matter in the same immature fashion as a teenage film student would go about making a zombie film.

Some people may argue that the vulgarity and gore are part of the film’s draw. If that was the case, it would’ve been the focus of the advertising. On top of that, there have been better executed examples of films centered on gore and vulgarity, and those films are upfront about what you are getting into.

There isn’t anything redeemable about this film. The dialogue is weak, as the characters didn’t have any real personalities. The focus of the film is in the wrong place and doesn’t allow for much mystery. The reveals, while potentially interesting plot points, are perpetrated in a manner that feels like an afterthought, not helped by the pointless gun fight tacked on to the end of the film.

“Sabotage” is not worth the full ticket price or even dollar theatre matinee pricing. There are much better popcorn movies in theaters, so don’t waste your time with this desperate attempt at a “gritty” action film.