When it comes to the works of the late Tom Clancy, much of my familiarity begins and ends with the video games that carry his name, namely “Splinter Cell.” I have not seen any of the previous Jack Ryan films, although research indicates that no one actor is inextricably linked to the character. That’s something Paramount hopes to change as they begin to establish the Tom Clancy Cinematic Universe. 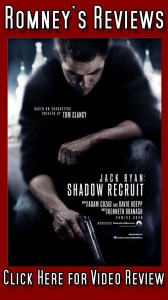 Chris Pine stars as the titular hero Jack Ryan, a former Marine who is recruited into the CIA as a finance analyst dedicated to rooting out companies who finance terrorist groups. When on a mission in Moscow, he is almost assassinated and is then informed by senior agent Thomas Harper, played by Kevin Costner, that he’s now an operational agent. This leads to a race against time as Ryan must stop a plot by a Kremlin agent, played by the film’s director, Kenneth Branagh, to destabilize the U.S. economy and destroy Wall Street.

While the economic warfare angle of this story feels a tad shoehorned, it’s delivered in a way where the plot comes across as a viable threat, effectively doing what “Paranoia” couldn’t. Couple that with some good action scenes and a well-paced story, and you get an action film that, while not a complete re-invention of the genre, is definitely an entertaining example of it – more than what usually comes out in January.

One problem I had with the film comes in during the third act, when the dreaded “shaky-cam” rears its ugly head. The visuals were so shaky and the cuts so quick that I literally couldn’t tell who was punching who during that final fight.

Despite that, this was still a very entertaining movie – one that does make me somewhat excited to see what follow-ups they might have planned. The film flows at a very nice pace with good performances coming from all around. If you are a fan of spy thrillers, or an aficionado of Tom Clancy, then you can expect to get your money’s worth here.