If you’ve been watching television, you’ll no doubt have seen a few ads for this film, advertising what appears to be some sort of British rom-com with the reset-button gimmick of time travel. While those TV spots make it appear that the love story is the central focus, the story itself has a little more to it than I first had assumed. 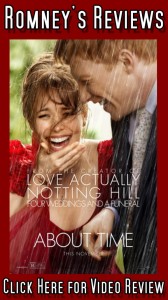 “About Time” centers around Tim, played by Domhnall Gleeson, who on his twenty-first birthday learns from his father, played by Bill Nighy, that he has the ability to travel through time. More specifically, he is able to travel back to moments of his life that he can remember, such as the ability to improve his life, as well as attempt to improve the lives of others. Rounding out the cast, we have Rachel McAdams, Lydia Wilson, Lindsey Duncan and Tom Hollander.

The advertising campaign is partially correct with the fact that much of the first act is dedicated to the usual romantic comedy fare. As such, it’s a little bit painful to sit through. However, what pulls us through is the well-written protagonist, as we see him use his time travel abilities for other purposes aside from trying to get a girlfriend.

From a technical standpoint, there’s not much else to say. The cinematography is fairly standard but not very memorable. The time travel itself is a very simple edit; the whole film taking an approach to time travel as one might see in a Frank Capra film. Much of this film’s strength comes from the story, which does keep you engaged for the most part, even if it is a little too saccharine in a few places.

As for elements that count against it, there were a few key things that ranged from being mildly annoying to moderately confusing in hindsight.

The element that bothered me while watching was the attempt to wed both diegetic music, which comes from the world of the film, and non-diegetic music, which is simply laid over in post-production, into a single montage. It mostly came across as artistic fluff that wasn’t necessary to the overall feel.

As for the remaining key things that bother me, much of it has to do with how time travel is used within the story itself. While they do go to some decent lengths to outline the rules, they also have the tendency to contradict them if not outright abandon them. I can’t give too much away, but if you’re a sci-fi nerd, prepare to tear your hair out in a few places or at the very least grit your teeth if you’re seeing this movie on a date.

Overall, “About Time” is charming, moderately insightful and has some well-placed comedic moments. If you go into it expecting a romantic comedy, then you’ll definitely enjoy it. As a film in and of itself, it holds up pretty well compared to the other romantic comedies I’ve seen this year. This is definitely one of the better date movies you can see in theaters.