Home Arts and Entertainment Movie review: ‘Romeo & Juliet’ — finally, someone gets it right!

When it comes to the works of William Shakespeare, I give them the same reverence that anybody looking to become a good storyteller would. However, when it comes to the various cinematic treatments of Shakespeare’s plays, I’ve always been very frustrated with the numerous approaches people tend to take when adapting them to film. 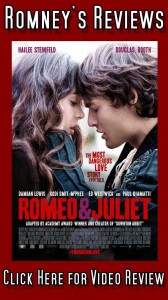 It was only until recently that I was finally able to verbalize what made me so frustrated about said adaptations, many of which being remedied to a good  degree in this umpteenth take on what can be argued to be The Bard’s most famous play, “Romeo & Juliet.”

This version stars Hailee Steinfeld and Douglas Booth as the titular couple, whose love blooms out of a long-standing and violent feud between the families Capulet and Montague. Actors such as Damian Lewis, Kodi Smitt-McPhee and Paul Giamatti round out the supporting cast.

I’ll be honest. I came into this film expecting the same static and hollow interpretation this play has been given for many years, with a setting that didn’t match the dialogue being spoken and thus leading to confusion and frustration as a viewer.

However, the first thing this film did right is that it risked, nay, dared to actually alter the dialogue of the play.

We still have the classic lines and speech patterns with a setting that actually matches, but while previous versions would adhere to the dialogue word for word, this version allows for what would probably be considered ad-libbing and banter between the characters. This still sounds Shakespearean, but is easy for audiences to understand.

On top of that, it did away with many of the soliloquies and exposition that, while good for the stage, is ultimately unnecessary for a visual medium such as film.

When it comes to the acting of the film, it’s a bit of a mixed bag but a few performers manage to stand out. Firstly, our two leads do a really good job of capturing the emotion of the story; the lines sound more like reactions and responses as opposed to sounding like quotation.

While most people tend to go back and forth between the characters being motivated by love and/or lust, their performances manage to strike a nice balance, making you believe that they are teenagers who really feel like they’re in love.

When it comes to the supporting cast, only a few roles stood out, namely Friar Lawrence, played by Paul Giamatti. His take on the character was not only believable but also very relatable, making for a wise voice of reason that knows when to smack a whiny teenager upside the head when he won’t shut up.

From a technical standpoint, I did have a few issues with how the film was shot.

For the most part it looks alright, as they were trying to create a style akin to renaissance paintings. I couldn’t shake the feeling that much of the cinematography, blocking and pacing felt more akin to a made-for-TV miniseries than it did a feature film; the compositing and visual effects resembling what one might see if a show like “Once Upon A Time” had a larger VFX budget.

Overall, this film surpassed my expectations when it comes to how a Shakespeare play can be adapted for the silver screen. The visual effects and cinematography needed some work. Some of the actors were a little on the “meh” side, but this film is definitely on the right track on how to properly translate those stories to the silver screen, showing respect to the source material while at the same time bringing unique ideas to the table.