Home Arts and Entertainment Movie review: Another boring “crime thriller?” It must be October…

I have no clever quips or observations to open this review save for a few blanket statements. No, I have not seen Argo. Yes, I’m mildly worried about Ben Affleck being the new Batman. As for any pre-conceived notions about “Runner Runner,” I’d file this under the same thoughts I had when looking at “Contraband” and “In the Cold Light of Day” where I thought “this might be interesting.” I would also file the reactions to the movie under the same category of mild disinterest. 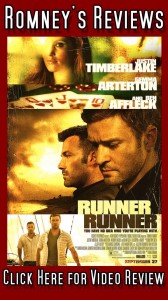 Justin Timberlake stars as Richie Furst, a struggling college student who, in a moment of desperation, gambles his tuition money away via online poker. He is cheated out of his money by players who hacked into the system so they could see the other players’ hands.

This leads him to travel down to Costa Rica, where the site is based, and confront the owner of the company, Ivan Block, played by Ben Affleck. Block, liking the cut of his jib, hires Furst at his company, leading to the usual story of greed, corruption, lavish lifestyles, and FBI agents trying to bring the company down.

This film is what I would call trailer-bait with added filler, as it has scenes that would look good in a trailer but that don’t really hold up.

Combine that with the predictable pattern of happy life montage: bad stuff happens-complain to Affleck-get paid-rinse and repeat—and you have a movie that feels like knock-off of other movies.

The film also makes the rookie mistake of relying on voice-over to convey information that could be conveyed much more easily on screen. On top of that, the voice-over lines aren’t even that clever, just the usual explanation of the plot while attempting to half-heartedly wax poetic.

Overall, the “Runner Runner” feels phoned-in all across the board as there’s no real sense of originality to it.

The story was boring, convoluted and just felt like the premise of much better movies as told by a disinterested high school student who’s been working at a Blockbuster for too long.