I’ve gone on record saying that I’m not partial to romantic comedies. More often than not, they’re always telling the same story over and over again. Going into “Enough Said,” I expected no different; with the film meeting those expectations beat for beat, and at the same time having a mildly interesting premise. 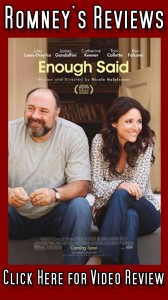 “Enough Said” stars Julia Louis-Dreyfus as a suburban masseuse and 10-year divorcee named Eva, whose daughter is about to leave for college. While attending a party, she encounters Albert, played by the late James Gandolfini who is also a divorcee with a daughter also soon to go off to college. At the same party, Eva takes on a new client named Marianne, played by Catherine Keener, who is a successful poet with a penchant for complaining about her ex-husband. Hijinks ensue.

This best phrase to describe this film would be “awkwardly formulaic.”

Despite the variation that sounds interesting on paper, the story still has the trappings of your run-of-the-mill romantic comedy.

There are some moments that do set it apart as an independent film, but those moments tend to range from mildly cringe-worthy jokes, to whole scenes of painful awkwardness.

A lot of that awkwardness isn’t really helped by the fact that earlier in the film, we’re given information that sets things up for some big payoff. This leads to a great deal of the runtime being spent waiting for said payoff to happen.

The film could have held up without, as it didn’t really add anything to the story save for more awkward payoffs.

One other gripe I have has to do with a subplot, and a friend of Eva’s daughter that’s supposed to establish some sort of reluctance to let the daughter go off on her own.

Overall, “Enough Said” didn’t really leave that much of an impact on me as a viewer. For a romantic comedy, it’s a pretty solid idea, with middle-aged divorcees as opposed to the usual starry-eyed twenty-somethings. The acting is good and the dialogue is enjoyable, but the overall plot and its reliance on painfully awkward situations as a source of humor didn’t work for me.

If you’re looking for a romantic comedy that brings an interesting idea to the table, then you’ll probably enjoy this film, but I don’t recommend rushing to the theaters for this one. On my personal scale, I give “Enough Said” a 3/5.