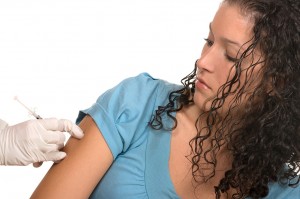 Author and nutrition columnist, Nadhirrah, agrees with the ancient Greek physician and philosopher, Hippocrates, who said “Let food be thy medicine and medicine be thy food.”

“Throughout the year, you should be building things and eating things that are building your health, your immune system, which includes eliminating mucous forming foods and increasing your fruits and vegetables, which are usually high in antioxidants. If you particularly need some immune building, there is things like garlic and broccoli, which are really good for building the immune system.”

Many great soup recipes can be found on the Internet although it might take a while to find the one that is just right for you.

Several vitamin-packed recipes especially for cold and flu symptoms can be found at www.wholeliving.com as well as The Stir blog by Café Mom.

Several years ago when I was a cook in the U.S. Navy and suffering with a severe head cold, I created a recipe to help relieve my symptoms.  I called the soup my Vitamin C Soup.

I had always heard of chicken soup as something to relieve cold symptoms. I started with chicken broth as my soup base, added diced sautéed onions, garlic, celery, carrots, stewed tomatoes, cabbage and about a teaspoon of lemon juice in a large pot on the stove. I stewed this soup for about an hour or so.  I even threw in a handful of pasta and broccoli about 15 minutes before I served it.

I remember immediately after eating it, how it cleared my sinuses and lungs, making breathing easier and leaving me feeling so much better.

Several times throughout the years, I have made a similar recipe and sometimes gotten the same relief from a cold and other times not feeling much different. I figured it did not really hurt to try.

Nadhirrah is vegetarian and likes to make something quite similar to what I make.  Although she is a raw foods chef, she says that she makes an exception when making this soup, since the heat from the soup really helps.

“One thing that do, if I actually do get sick, is make my Mom’s Cold Killer Soup,” says Nadhirrah.

Cold Killer Soup has organic cabbage, tomatoes, garlic, jalapeno pepper (optional if needed for sore throat), much like chicken soup for the vegetarian.