Home Arts and Entertainment ‘One Direction: This is Us’ (in your typical formulaic concert documentary)

Remember when boy-bands were just a relic of the 90s that were looked on with shame and awkward laughter? I do, but now it seems they have somehow resurfaced, with one boy-band in particular amassing a sizable legion of female fans from around the world. Like so many popular artists of the past few years, it was only a matter of time before they were given a concert documentary film. 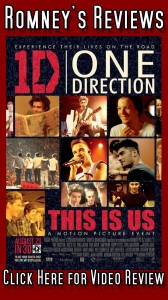 The film is your typical “all access look” that covers the lives of the five members of One Direction starting from childhood, leading to their time on “X-Factor,” and the resulting stardom that followed.

All of this is spliced in with “3D enhanced” footage from their concert at the O2 Arena in London and brought to us by documentarian Morgan Spurlock, who also worked on the Katy Perry and Justin Bieber concert documentary films.

Spurlock’s style is greatly subdued in the documentary portions of the film.

Granted, this is a film that’s essentially an advertisement for One Direction. As such, having the presence of the documentarian may hurt the overall style the people funding the movie would be going for. The documentary segments are well produced and do a good job carrying the film with the sentimental parts being the strongest.

However, there were parts that felt staged, particularly when you’d have members of the group discussing more sentimental aspects that directly relate to how the group functions as a boy-band. Things seemed a little too perfect during those moments.

When it comes to the concert segments, there’s not that much to say. It’s footage from a concert that was shot in 3D with added visual effects that cater to 3D viewings. While some of the added effects worked for some segments, there were other parts where they were more distracting, particularly during the group’s cover of “Teenage Dirtbag,” where they decided to go with a comic book motif. The Alex Ross-inspired stylizations were too quick and didn’t allow the viewer to really look at them long enough to find interesting.

On the whole, this is a decent documentary.

Is it really innovative and pushing the boundaries of concert films? No. It’s a formulaic concert documentary. A very well produced one, but not really anything worth rushing to see unless you’re a fan of One Direction. Beyond that, there’s not much appeal to the film on its own.

For this reason, I’m not going to assign a rating as it really has no use here. People who are fans of One Direction are probably already planning on seeing the film opening day. People who aren’t are most likely going to pass this film over like they have with the other concert movies that have come out over the past few years.