Allow me to preface this review with a bit of a disclaimer. When it comes to my high school experience, it’s not exactly what you would’ve called normal. I bring this up because the unorthodox nature of my high school experience and the memories of that experience, which still remain fairly fresh in my mind, have left me fairly unable to really relate with characters and stories that claim to be set in high school, especially when those stories border on the extremes of saccharin romance and so much angst that you’ll have to refill your prescription of Prozac before it’s even over. 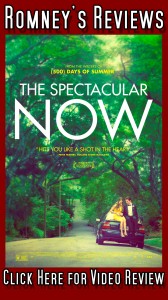 Even though I still have issues with how “The Spectacular Now” stands as a film, I feel that I have to make it clear that I’m coming at this from a fairly bitter and biased perspective. There may be some elements of the film that many of you readers may find enjoyable that I detest, so I will try to keep mention of said elements to a minimum except where it’s relevant.

“The Spectacular Now” follows Sutter Keely, played by Miles Teller, who is a high school senior, party animal and budding alcoholic. After getting dumped by his girlfriend, he goes on a drinking binge and wakes up the following morning on the front lawn of Aimee Finecky, played by Shailene Woodley. While Sutter chooses to live in the moment, thus the film’s title, Aimee is the forward-thinking “nice girl” who reads science fiction books and has never had a boyfriend. You can pretty much guess where the rest of the story goes from there.

However, this leads to one of the biggest issues I had with this film. If I were to slice it down the middle, you’d have one half of the film filled with a happy, somewhat uneventful romantic comedy, with the other half filled with angst. I’m not saying that the story should’ve been one way or the other, but there was a lack of tonal balance.

On top of that, the plot point that causes the angsty moments in the latter half feels like it came out of left field.

There wasn’t really any build up or scenes to establish it. It’s just introduced into the story as a minor character trait with the importance of said trait not being defined early enough in the film to make it significant.

On that same note, some elements of the story were over-emphasized and given too much importance, namely the romance. While I understand that the romance was actually an important element, I don’t feel that that’s where the real story was. It felt like an over-explanation of back-story and motivation for the dramatic scenes to follow and didn’t really aid in conveying the underlying themes the film addresses.

Other than that, there’s not much to say.

It did feel long in a few places, causing the aforementioned tonal imbalance, and also feels like it’s stuck somewhere between your typical critical darling from Sundance and a romantic comedy from the mid-90s.

This is definitely one of those films for the said Sundance crowd as well as for those of you who feel nostalgic about your high school memories and want to attempt to relive said memories prior to the crushing realization of your current age and the fact that those days are now gone.

As a romantic comedy, it does the job, but as a Sundance film, or at least the kind of film you’d expect to see at Sundance, it needed a little more bite. All that said, I give “The Spectacular Now” a 3.5/5.