If the past few years have taught us anything, it’s that corporate culture can make for good entertainment while at the same time serving as a scapegoat for the world’s problems. There are television series that explore the wheelings and dealings in the corporations of the past, but can you sell a modern day tale of corporate espionage to a mainstream audience, at the end of the summer no less? 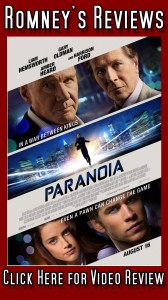 Liam Hemsworth stars as Adam Cassidy, a low-level programmer who, as retaliation for the firing of him and his co-workers, decides to use the Wyatt Corporation’s discretionary expense account for a night of drinking and partying. When the head of the company, Nicholas Wyatt played by Gary Oldman, finds out, he issues Cassidy an ultimatum: either be prosecuted for credit card fraud or work for him as a corporate spy in order to steal a prototype from a rival company run by Jock Goddard, played by Harrison Ford.

There are some moments in the film that are good, but most of it feels boring. It gets off to a pretty slow start and is bogged down by a few unnecessary subplots throughout the rest of the film.

One of the major issues with the story can probably be attributed to the fact that this is based on a novel.

There are plot points and elements that feel underdeveloped and probably had larger roles in the source material, meaning there’s a great deal of information we’re not being given as an audience.

The film felt like it had certain scenes and elements to cater towards a more mainstream audience, such as an action scene and the inclusion of “corporate hit-men.” Even the title doesn’t entirely make sense as the feeling of paranoia doesn’t serve as an underlying theme to the story.

The acting is okay but not too memorable.

The performances of both Ford and Oldman felt a bit lacking in terms of any real characterization. It’s not that they felt cartoonish, there just wasn’t much to the characters and that really comes across in their performances. Even our main lead’s character felt a tad bland, as the motivations “established” at the start feel muddled at best.

If there was one phrase that could summarize this movie, it would be “wasted potential.” The premise was interesting enough, and all the elements were in the right place. They had the potential to make the next Wall Street, but they chose to make a mediocre suspense thriller that’s more palatable to mainstream audiences.

Had they taken out the action elements and trimmed out the unnecessary scenes and subplots, then this could’ve been a fairly cerebral yet intense film. Instead, we’re left with a fairly boring film that has a few good bits here and there, but not enough to carry the entire movie. On my personal scale, I give “Paranoia” a 3/5.