The success of sequels oftentimes hinges off the impressions made by previous films in a series. For the most part, “Red 2” seems to avoid that trend. If the 2010 film “Red” slipped under your radar as it did for me, “Red 2” is written in a way that doesn’t entirely require having seen the previous film in order to enjoy the sequel—although you may miss some of the jokes as a result. 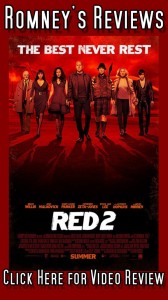 “Red 2” begins with former CIA operative Frank Moses (reprised by Bruce Willis) trying to live a normal life with Sarah (reprised by Mary-Louise Parker), who longs for the action and excitement of Frank’s former life. Things change when they find out that Interpol is hunting him due to his involvement with Project Nightshade, a Cold War military operation where a nuclear weapon was smuggled into Moscow and could be readily detonated at any moment.

In order to clear his name, Frank has to reunite with his fellow operatives Marvin and Victoria (reprised by John Malkovich and Helen Mirren, respectively), retrieve information from Katja, a former flame/KGB operative (played by Catherine-Zeta Jones), find Bailey (played by Anthony Hopkins), the scientist behind the operation, all while being pursued by the world’s top assassin, played by Byung-hun Lee.

If the plot feels like something ripped straight from the 80’s, that’s probably intentional.

The film pokes fun at the sheer ridiculousness of the situation. This is seen not only with the more genre-savvy reactions from the characters during the action scenes, but also from the bits of unrelated small talk and discussion of Frank’s relationship troubles during the very intense missions.

Just because the film is satirical in nature, it doesn’t mean that it doesn’t have some really intense action scenes, with everything from gunplay to car chases to some really impressive hand-to-hand scenes. All of this is delivered in your typical, delightfully over-the-top popcorn movie fashion.

The actors also turn in good performances, especially when it comes to the character bits. Zeta-Jones and Hopkins bolster an already star-studded cast. You will notice the chemistry between the cast members and that they enjoyed playing their roles.

All in all, even though I hadn’t seen the previous film, I still found myself enjoying this one.

“Red 2” has good action combined with good comedy that plays to the strengths of the parties involved. If your looking for a fun action film with veteran actors that has a more refined edge than “The Expendables” then this film is for you. On my personal scale, I give “Red 2” a 5/5.