Home Arts and Entertainment Movie review: Gru and his minions can’t save ‛Despicable Me 2’

Many people are under the impression that film critics and cinephiles have the tendency to judge all films on the same level, regardless of its intended audience. Let me be the first to tell you how that’s as fallible as the “No True Scotsman.” 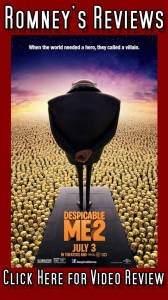 The thing is that we’re well aware of demographics. We understand when we are not the intended audience of a film. As such, we don’t look at a film like Despicable Me 2 and compare it to the standards set by films such as Citizen Kane or The Godfather.

Why bring this up? Well, this is to establish that even when looking at a film beyond our demographic and looking at it from the perspective of said demographic, one can still find flaws with the film in question.

In the case of Despicable Me 2, I have a feeling that some of the flaws may be attributed to some of the events that transpired behind the scenes. The most notable of these events being Al Pacino, initially cast as the film’s villain, dropping out of the film midway through production after already recording some of the lines of dialogue for the character.

While Illumination Entertainment managed to keep the story contained, the sudden departure of one of the main stars definitely dealt a blow to the film.

Much of the cast from the previous film, including Steve Carell, Russell Brand and Pierre Coffin, reprise their roles as the story picks up a short while after the events of the previous movie.

Gru (Carell), now a full-time father, is recruited as a temporary operative of the Anti-Villain League. His mission: find out who stole a secret Arctic laboratory and the mutation serum the lab was studying by going undercover as the owner of a bakery at the Paradise Mall. Joining him on his mission is his new partner/obligatory love interest Lucy, played by Kristen Wiig. Taking Pacino’s place as the villain, Eduardo, is television actor Benjamin Bratt.

The story is lacking at best, even by family-film standards. The biggest problem is the introduction of several subplots that don’t really lead anywhere and somewhat overshadow what’s supposed to be the main plot.

The second biggest problem I found is that the flow of the story tends to be brought to a grinding halt to make way for the comedy, particularly when it comes to the scenes with the minions. As a result, those scenes feel out of place and tacked on.

Don’t get me wrong, there are some good comedic bits here and there, but for the most part, the comedy is hit-and-miss. Among the good jokes sprinkled throughout, the bad ones stick out like sore thumbs.

Even when we see the resolution of the main plot, its importance has been greatly subdued to the point where I found myself not really caring what’s going on. This is made worse by its lack of a proper climax, despite the film’s attempt at building it up.

Another aspect I really must point out is that the pacing and writing felt more akin to a TV movie, something you’d watch with your family on network television as opposed to seeing it in theaters.

The only hang-up I can give from a technical standpoint is the frequent pandering to 3D-viewers, making it feel like the film is mocking you for viewing it in 2D.

This film is not a very memorable one. While it will provide solid entertainment for younger audiences, it’s probably not going to endure for very long. You don’t need to have seen the previous Despicable Me in order to follow the story of the second one, but what story there is feels incomplete, as if the script went through too many revisions to the point where the original story they wanted to tell got buried by the subplots and comedy.

Unless you have kids that are absolutely DYING to see it, then you’re better off waiting for the DVD. On my personal scale, I give Despicable Me 2 a 3/5.