Zombies, they still resonate with audiences today like they did a few years ago when there was the sudden spike in popularity. It was during that surge that we saw the release of the two Max Brooks novels, The Zombie Survival Guide and World War Z, a follow-up that chronicles a reporter’s efforts to record the stories of those who survived a worldwide zombie outbreak.

Upon looking at the first trailer, you could immediately tell that it was nothing like the book. The inclusion of running zombies is one of the dead giveaways as the zombies in Brooks’s novels are more akin to the slow moving Romero zombies that are mostly dangerous in large hordes.

While I may not be familiar with the drama that occurred during production, I did get worried when I saw that the film had a total of five writers, two writing the screen story with the main screenplay penned by the other three. As anybody who is a frequent movie-goer is aware, the more screenwriters a film has, the more likely that it will be terrible a la the old adage of “too many cooks spoil the broth.”

On top of that, Paramount was daring enough to offer the $50 dollar Mega Ticket at select theaters, which included an advanced screening, a free download of the film when it’s released on DVD, commemorative 3D glasses, a poster and a small popcorn. Maybe Spielberg was on to something when he predicted an implosion of the film industry.

Brad Pitt stars as former UN investigator Gerry Lane who, after he and his family escape the aftermath of a viral outbreak, is tasked by the deputy general of the UN, played by Fana Mokoena, to look for the source of the outbreak so that a vaccine can be developed, taking him across the world in a search for answers.

While this movie isn’t terrible, it’s not without its flaws, as there are a great deal of scenes, characters and plotlines that don’t really contribute to the overall conclusion of the story. 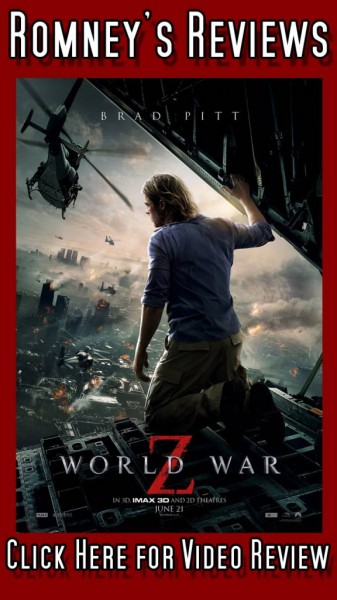 Even the opening scenes where our hero and his family narrowly avoid the zombie horde feels like it could have been trimmed down.

The film also suffers from a good degree of shaky cam in those opening scenes. While I normally let it slide for suspenseful sequences, there are times where it feels unnecessary. Thankfully it’s subdued in later scenes, but that’s mostly attributed to how long the movie feels at times. Although it has some interesting ideas to keep you moderately invested, a lot of the story tends to devolve to the pattern of investigation-zombie chase-brief respite-zombie chase.

Speaking of the zombies, the effects are pretty good, but some of the more visceral aspects of the story they are trying to tell is hampered by the lack of certain shots and information.

I don’t think the film should have an endless showcase of gore, but if the hero’s weapon is stuck inside a zombie’s head and they’re trying to pull it free while another zombie is charging at them, you have to show the weapon stuck in the zombie’s head rather than tip-toeing around it.

Overall, while World War Z had some interesting ideas, some of the scenes and characters felt unnecessary, plot-threads that felt tacked on and music that suffers from the Hans Zimmer effect where the music becomes intense in places where said intensity is not needed. To top it all off, the movie tries to play it safe when it comes to depicting the zombies and avoids any and all instances of gore in an attempt to make it more marketable.

It’s not worth the mega ticket, and it’s most certainly not worth the full price. On my personal scale, I give World War Z a 3/5.