Home Arts and Entertainment Movie review: Watch ‘The Purge’ when your faith in humanity is too...

When I first saw the trailer for this film, I had mixed feelings. The premise is akin to something that would come from the mind of Rod Serling, Ray Bradbury, or Kurt Vonnegut Jr. As such, it sounded like something that would have worked better as an episode of The Twilight Zone or Night Gallery, rather than as a feature film. 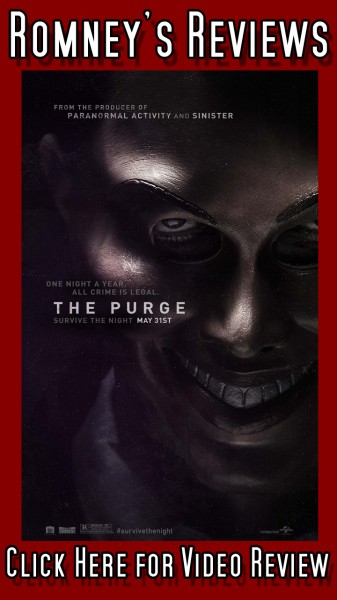 It wasn’t helped when the news that Michael Bay was the producer broke a while back. However, there appears to have been several producers, so there’s no clear-cut way to gauge how much involvement he had in the actual production of the film.

The Purge takes place in an eerie utopian version of the United States where employment is down to 1% and crime is practically non-existent. This is attributed to the annual “purge,” where all crime, including murder, is legal for 12 consecutive hours, thus allowing the citizens an outlet for their pent-up aggression.

The events of this story center around the Sandin family, played by Ethan Hawke, Lena Headey, Adelaide Kane, and Max Burkholder, who are your typical upper middle class family with an up-to-date security system to lockdown the house.

Things go south at the start of the purge when the young son Charlie, played by Burkholder, temporarily disarms the security system to grant sanctuary to a homeless man, played by Edwin Hodge, only to bring down the wrath of the assemblage of people pursuing him.

The leader of the group, played by Rhys Wakefield, issues an ultimatum, send out the homeless man to be killed, or they will break in to the house and kill everyone inside.

As the trailers and various promotions of the film might indicate, this is almost like a modernized and suburbanized version of Straw Dogs. Like Straw Dogs, the film feels like it’s trying to make its own commentary on various topics, including white supremacy, class warfare, cultism, peer pressure, and whether or not humanity is violent by nature.

The problem is that it’s overall message and intent is muddled at best as the film feels almost afraid to go in one direction or another, particularly during the final moments.

Part of the lost potential for commentary comes from very subtle items that are established within the film, making it feel as if some things were cut. There are also times when it feels like its unnecessary lines and unresolved plot threads feel lifted from other films.

Unlike some of its contemporaries, it does a pretty good job building up the scares as the terror of the film is looming from the outset  and continues to loom over the main characters throughout the film. It does fall into the trap of the predictable jump-scare on occasion but manages to keep it to a minimum instead opting for a continuous thread of terror and suspense.

I also liked is that it didn’t devolve into a straight-up firefight as the film progressed using the fact that most of the characters have no idea how to even fight as a tool for building suspense.

I kind of liked this film in a weird, disturbing sort of way. It’s one of those films that you like but feel bad for liking it as it is by no means a happy story nor does it even have that much of a conclusion aside from the bare bones.

Its biggest strength is its brevity. It only clocks in at 85 minutes and doesn’t waste the audience’s time with filler scenes or exposition, which allows the film more time to build its suspense.

If you’re in the mood for a thriller that gets the job done without the fluff or gratuities or if you’re just looking for an example on how to write a thriller, give this film a watch.