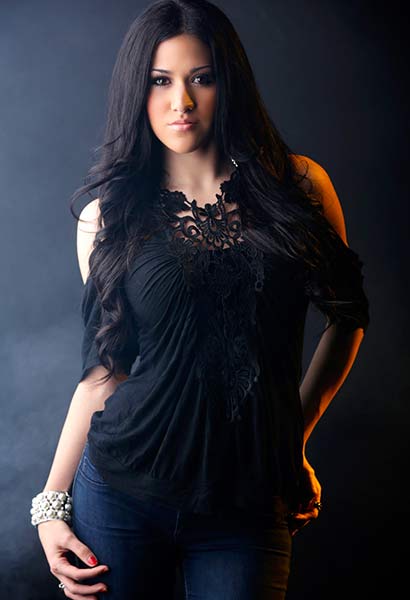 Merniez has been dancing since the age of 7, and was a Radio Disney dancer from the ages 12 to 17. With waiting tables, dealing with mid-terms and having to maintain the “perfect” body size, she is used to having a packed schedule.

“When you love and enjoy what you do, it’s not a stress factor; it’s a stress reliever,” said Merniez.

Merniez says that despite the stress, the Blaze works very well around her schedule, and she found a way to limit her SLCC class time to Tuesdays and Thursdays.

Merniez is attending SLCC for her generals. Her ultimate career goal is to be a dancer for an NBA team like the Utah Jazz.

Right after high school, Merniez tried out for the Utah Jazz’s dance team and made first cuts but didn’t make it past that.

After hearing about tryouts for the Blaze Dance Team from a member, Merniez decided to try out

The week before tryouts, Merniez tore a hamstring, but she pressed on and made the cut.

Merniez says that the life-span of a Blaze dancer is never certain. Girls on the team need to try-out every year with the newbies. Last year, three of the girls who were on the team did not make the cut again because there was better talent.

Despite the competition, Merniez says that all of the dancers get along. They’re a tight knit group, and it’s always good times and laughs.

“The Blaze dancers are not cliquey at all; we hang out after practices,” said Merniez. “I’ve made a lot of new friends by being on the Blaze’s dance team.”

Merniez says that a lot of the football players are “super attractive,” but that Blaze dancers are restricted from having any sort of relationship with any of the players, romantic or not. Being close to the football players would give the dance team a bad, unprofessional image. The girls are not even allowed to add them on Facebook or follow them on Twitter.

Even though it is rough, Merniez loves pushing her body to the limit

Merniez talked about the extreme workout they have to do and that some girls have vomited because it is so hardcore.

“You know how people take a ‘fun’ class, like an art class. Well my ‘fun’ class would be a gym class,” said Merniez. “I consume so much food, if I didn’t work out, I would be on The Biggest Loser.”

Merniez says that she gets frustrated when people say that sports’ dance teams are degrading to women.

“In my eyes, it is a very respectable job, and it’s artistic. You need to be very strong to perform the moves we do,” said Merniez. “It is not just prancing around and looking good. Little girls look up to us. I remember seeing dancers and wanting to be there.”

For information on Blaze games and where SLCC students can see Carolina Merniez perform with her team, check out the Utah Blaze website.